‘Do you want to make something?’ Mum asked.

‘We could make a cake. Or some cupcakes?’ Shelby looked hopeful… ‘We could ice them with that bright blue frosting and white chocolate chips…’
Mum interrupted.  ‘Dinner is cooking in the oven, Shel. I don’t think we’ll be able to fit anything else in there for quite a while.’
‘We could make a fruit salad,’ suggested Shelby, who was almost always hungry.
Mum looked away and Shelby suspected that she was trying not to laugh – she suspected this because Mum’s shoulders kept jiggling up and down. When she turned back to look at her daughter, Mum’s eyes were watering and a little bit pink round the edges.
‘What about making something that isn’t food, Shel?’
‘Pompoms?’ suggested Shelby.
‘No wool.’
‘Birthday card for Auntie Jackie?’
‘We used the last of the card sheets for Uncle Daniel’s birthday.’
Shelby was silent for a moment.
‘Mum… do we have to make things all the time? We could just take the dog for a walk, or I could go to my bedroom and practice my dancing?’
Mum scratched her chin.
‘Well we could, but…’
And then Mum’s face lit up so bright and shiny that it reminded Shelby of the biggest and brightest glittering bauble on the Christmas tree.
‘I’ve had a brilliant idea,’ Mum said as she rushed from the room.
Shelby stayed where she was. Her mum was always doing this kind of thing. She’d get excited about a most ‘brilliant idea’ then would tell Shelby about it. But then Shelby would always think it was boring – or disappointing. Might it be tissue paper, dried flowers, ripped up newspaper, or air drying clay and wallpaper paste? Shelby was prepared for all those things – and more – but she wasn’t prepared for what her mum brought into the room a few minutes later.
Mum returned holding what looked like very old clothes. She held up one of three dresses in front of her daughter.
‘This dress was Grandma’s favourite,’ she said, stroking the stiff curly collar.
‘What’s so special about it?’ Shelby asked, in genuine wonderment. How could something so stiff and weirdly coloured that stuck out in such odd places, ever have been grandma’s favourite dress?
The Grandma that Shelby knew had worn long stretchy trousers in very dark colours, and simple t-shirts in colours she called ‘lemon’ and ‘mint’ and ‘rose pink’. She wore bright coloured soft cotton socks on her feet in winter, and added extra-thick handmade ribbed socks when the weather was really cold. She wore gloves without fingers even when it wasn’t cold outside, but when it was frosty she wore them under her mittens too. She wore furry scarves and bobble hats, and even her hair was fluffy and bouncy – just like a cotton wool puff.
All of that was Grandma. This dress definitely was NOT Grandma.
Mum put the small pile of clothes onto the sofa and took a large padded book from the bottom shelf of the bookcase. It looked to Shelby as if the book was made of the same thing as the huge Valentines cards that Dad bought Mum every year – only this one was dark green with words and pictures on the front in gold.
‘Made of leather,’ said Mum. ‘And very old. Over 100 years old. It belonged to Great Granddad and then Grandma. Only the best and most important photos are allowed in it. There’s one of the dress in here somewhere.’
Shelby took the photo album from her mum and ran her finger round the edge. Leather crumbs were falling off from round the edges and it smelled like the mothballs she remembered from Grandma’s wardrobe. The writing was fancy and surrounded with spirals and flowers. It simply read ‘Our Family Album’.
‘The photo is about halfway through the album,’ said Mum. ‘It’s one of the first colour ones.’
But Shelby opened the album at the beginning. After all, it was a rainy day and she had nothing else to do.
At the beginning of the album, the photographs were small, square and brown, then later most of the pictures were rectangular in shades of grey, black and white.
It was half way through the album when that changed. Suddenly the dark greys were replaced by faded yellow and pinky-red colours.
And there it was. The dress.
And there she was. Grandma.
Holding the hand of a very young looking Granddad.
Shelby pointed at the photo.
‘Mum, look, the horrible dress. All the girls in the picture are wearing it. Was it school uniform?’
‘No, love, it was a wedding. Grandma was a bridesmaid. But it wasn’t like now when everything is fancy and is only worn once. Back then, Grandma and her friends were poor, so they all saved up to buy matching dresses that they could wear afterwards.’
Shelby stroked the dress. It was as stiff and scratchy as it looked. She held it up in front of herself and examined the design closely.
The colours were brown, mushy yellow and orange, and the pattern was made out of hundreds of nasty circles all bumping into each other. The buttons were enormous and the dress’s whole shape reminded Shelby of a clown wearing a very tight nightie.
‘What do you think?’ asked Mum.
‘What about?’
‘About the dress. What do you think?’
‘It is kind of horrible. But…’
Mum nodded.
‘Yes. I know what you mean. But Grandma said it was “all the rage” when she bought it.’
‘What?’ 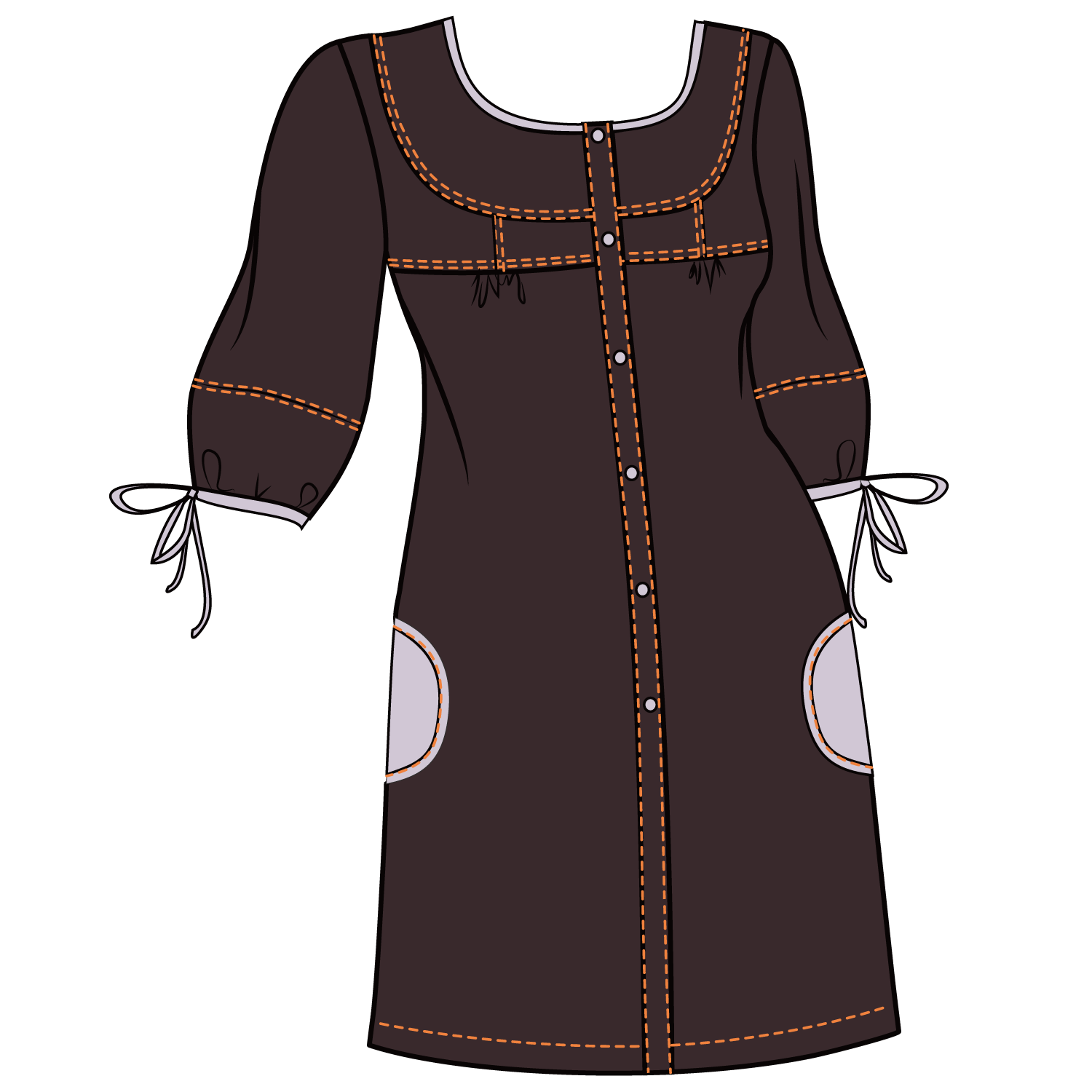 ‘All the rage. Like the glittery tops that are in all the shops at the moment. Fashionable. Everyone wearing them.’
‘Everyone wore that?’
Not just those five ladies in the photograph? Shelby found it hard to believe.
‘Yes. Well, that kind of thing.’
Shelby let go of the dress, dropping it to the floor at her feet, and lay down on the sofa. She thought about her own clothes. They were comfy and soft. Her t-shirt was stretchy and her leggings were warm, fluffy and so comfortable. She could kick her legs up like this and roll around on the floor like this.
‘I bet Grandma was always cross when she wore that dress. I bet she couldn’t even move!’
Mum agreed.
‘I thought it might help you understand what life used to be like. I thought that instead of making something, you could maybe play dressing up. I could take some photos and we could make a scrap book.  I’ve got a spare one here. What do you think?’
‘You always have to make something,’ protested Shelby, but she had to admit that the idea did sound as if it might be fun.
Like most nine year olds, she wasn’t so grown up that she couldn’t enjoy dressing up.  She ran up to her room, clutching the three dresses, and in just a few moments she was downstairs parading in the first one – a dress in the brightest pink you could imagine. It was the kind of pink that even Barbie would think was a bit too bright. Round the waist was a thick white pretend belt, and an enormous pretend bow. The collar was long and pointed and white.
Shelby was big and tall for her age, but the dress fitted her.
‘Grandma must have been tiny,’ she said.
‘Well, yes, but they were very short dresses, and very tight. Not loose like the clothes we all prefer now.’
Shelby paraded up and down the living room, posing in front of the fireplace, stroking the dog and scratching where the label was sewn into the collar.
‘Scratchy,’ she said, as Mum finished taking photos.
‘Try the other ones,’ suggested Mum.
Shelby ran upstairs and had removed the pink dress even before she got into her room.  It wasn’t long before she was downstairs again. This time the dress she wore was black and stretchy with a very high neck and a triangle-shaped, far too short skirt. The material glittered in the dull light of the living room.
‘Like it’s made of tinsel,’ said Shelby as she posed for a photograph pretending to eat an apple, and another few sitting on the sofa and standing by the window.
‘I think it’s called Lurex. That’s itchy too.’
‘Yes,’ agreed Shelby.  ‘I can’t wait to take it off.’
It wasn’t long before Shelby was downstairs again. This time she’d come down the stairs quietly.
‘Look, Mum,’ she said, in a quiet whisper of a voice.
Mum got up from her position in the armchair, saw Shelby in the doorway and gasped. Shelby had combed her hair and styled it in the same manner as Grandma’s had been styled in the photograph. It was parted in the middle, with two long plaits.
‘Wow,’ exclaimed Mum. ‘You look just like her. My Mum. Your Grandma.’
And Mum began to take photographs. She even took a few selfies of herself and Shelby.
‘Peas in a pod,’ Mum said. ‘You and Grandma. Peas in a pod.’
Shelby went upstairs after a little while to get changed into her own fluffy, comfortable clothes. When she came down, Mum was at the computer with slightly pink eyes.
‘Are you alright, Mum?’
‘Just a bit overwhelmed. I hadn’t realised how much you do look like her.’
‘Yes. What are you doing?’
‘Printing.’
And out of the colour printer came a large sheet of paper. In the centre was one colourful photograph. It was one of the pictures of Mum and Shelby snuggling on the sofa together.  Shelby was wearing the horrible dress and Mum was kissing her cheek.
‘We can still do the scrap book, but this is definitely one for the family album,’ said Mum as she began cutting around the photograph.
‘Definitely one for the family album.’

TO THE WordPress author blog fo

‘Melissa and the Mobility Scooter’

Why We LOVE Short Stories